Last night, I was listening to music, about to go to bed, totally relaxed, and then suddenly smelt that something was burning. I ignored it as I thought it was probably coming from outside. About 30 seconds later the smell was so strong I realized it must be in the room. In panic I just pulled out all electrical equipment such as the PC etc. (no time to "shut down"). The situation seemed to get worse still. I looked up at the light and there was a reasonable amount of smoke in the room.

This whole situation happened within about 60 seconds I think – from peacefully listening to music, to me having yanked all the power cables out and the room containing a bunch of smoke.

The smoke started to slowly dissipate after I'd turned everything off. That was good, I still had no idea where it was coming from. After about 30 minutes there was no smoke any more, and confident (or hopeful) that the problem had been solved (at least for the short term) I went to bed, putting off dealing with the actual problem until I was fit again the next day.

My two suspects were either the PC or the light fitment in the room. The light looked OK. I inspected the PC in the light of the day and it also looked fine. No burn marks or anything. I mean for such a lot of smoke, there would need to be physical burn marks, wouldn't you think. So I turned the PC on, and about 10 seconds later there was visible smoke, not as much as the night before but still. And the smell of burnt plastic was back. So at least I knew what the source of the problem was.

A bit more inspection (and turning it on a few more times just briefly) led me to see that while the PC was on, thick gray smoke was just pouring out of the PC's power supply.

I mean it's not the end of the world, PCs can be replaced, nothing bad happened! But I just think of the number of times I've left that PC on and gone to work, or gone to the kitchen, .. it was just as well that happened while I was sitting in front of it!

Here's a picture of what the room looked like after the PC being on for about 10 seconds this morning – the PC wasn't even on long enough for the Windows logo to come up yet. 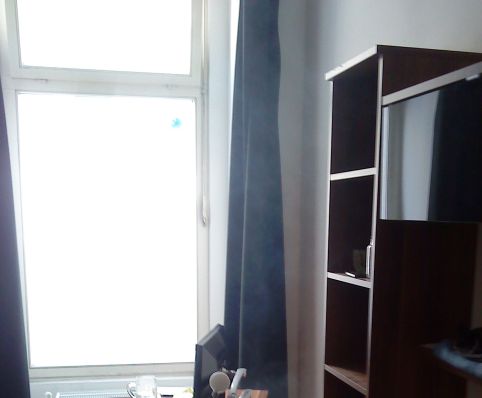 Ah and there's another point I should mention. I'm on some medication for sleeping and depression (not strong medication!) which I have to take an hour before going to bed. I'd taken that and the hour had passed so I was just about to switch the PC off and go to bed when the incident happened. A slight side-effect I've noticed is that I have increased levels of anxiety. It's not bad, but it's there.

And believe me, when an unknown source of smoke and burning suddenly appears in your room, having taken medication which increases anxiety is not in any way what you need.

And further, sleeping medication reduces your coordination and concentration etc. This is fine if you want to go to bed (as had been my plan) but is not so ideal if the situation suddenly changes from going to bed into potentially putting out a fire, ... as I was moving from one place to another in the room to try and determine the source of the smoke, I kept on not being able to walk straight and nearly falling over...

This article is © Adrian Smith.
It was originally published on 6 Jun 2011
More on: Life | FAIL