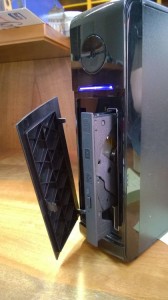 Today I wanted to use some software I have on CD on a new computers. Obviously modern computers don't have CD drives. One "mini PC" I have at one of my offices, however, does. My plan was, today, as I'm at this office, to use the CD drive to create an ISO of the disk. (It's my computer, doesn't belong to an employer.)

However, for some time, the "door" of my little mini PC has been stuck. It worked fine at my old office sektor5 (= i could open it to get to the CD drive) but it never worked at the new company hiQ. I've tried it a few times (to get to the reset button) but could never get it open, it seems stuck (in the case of the reset button i just turned it off and on then, using the main button which is outside the door).

Today, i decided, it's only a PC, it's only plastic. If it really doesn't open then, well, I might as well force it and break the door if necessary. There's no point having a nice-looking PC door, if it doesn't work, and you can't actually use the equipment inside.

So, basically, today I tried really hard to persuade it to open without breaking it, but it just wouldn't open it. So i forced it, now the plastic broke, now i can use the CD drive, so in a way everything's good.

I now realize that the problem was I was trying to open the door the wrong way; the hinge was on the other side. If only it'd occurred to me to try and open it the other way, I would still have a beautiful door, nothing would have been broken. I don't know why this just didn't occur to me at all.

Now my PC looks like shit with a broken door hanging off it, and all completely needlessly.

That makes me sad.

This article is © Adrian Smith.
It was originally published on 5 Aug 2014
More on: FAIL | Life